Habitat Soundscaping gets the nod from CSIRO

The science must work. CSIRO wouldn’t be doing it otherwise. This means very soon we’ll be able to show you our first fully-fledged example of Plantronic’s Habitat Soundscaping technology, known to increase productivity in an open plan office by 15%. Watch the video for an explanation. 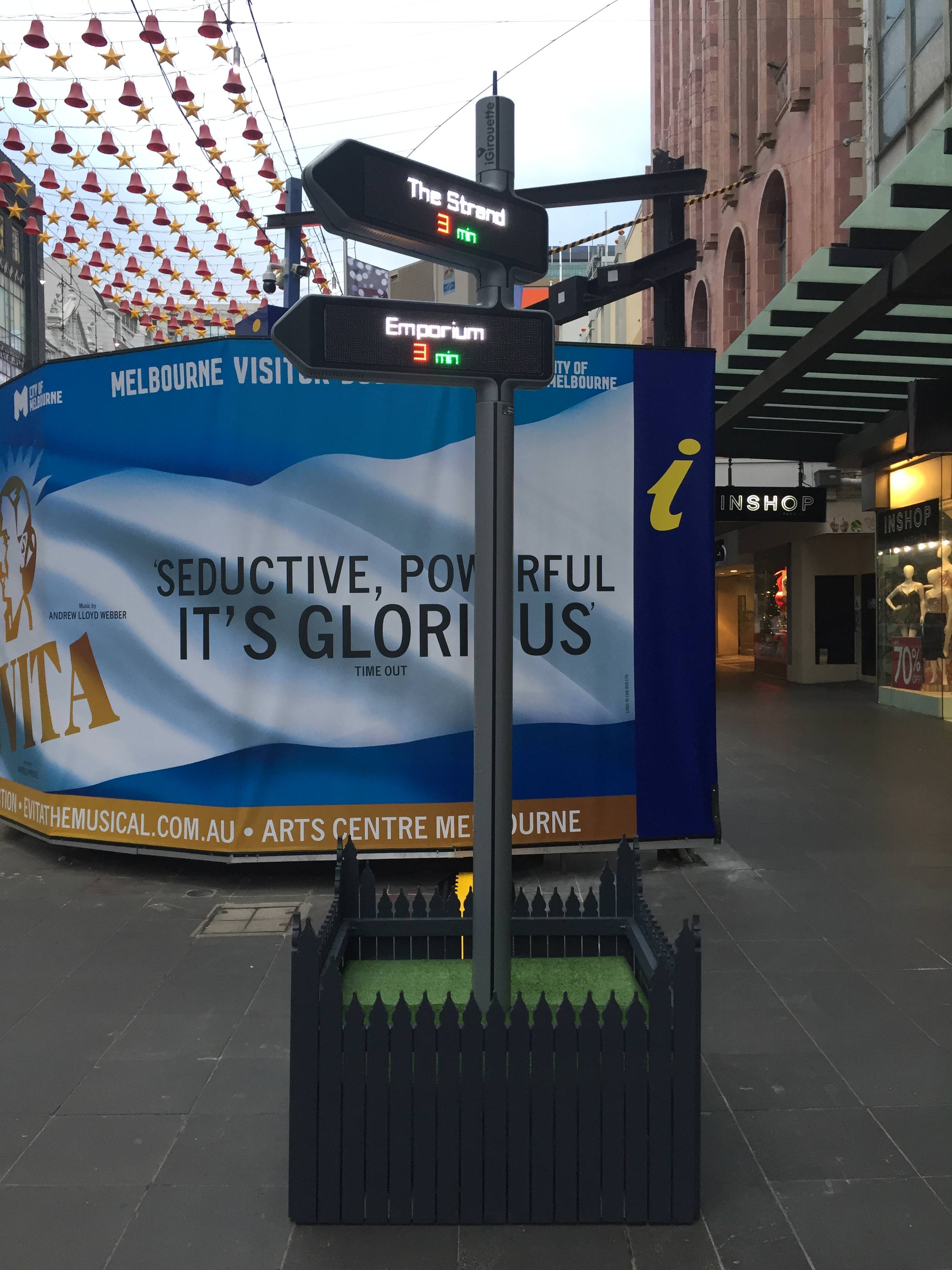 Santa knows where he's going when he gets to Melbourne thanks to this animated signage from France. Able to be programmed with a vast number of destinations, it can point pedestrians in the right direction as well as give them a travelling time and distance. It can also show the mode of transport. The City of Melbourne is having a bit of fun with it as part of their Christmas promotion. It literally turns heads.

Construction took a lot longer than the 44 seconds shown here but it all went smoothly.

They're Australia's biggest, they're beautiful and Ci did them both.

It's not the first time Ci has held the record for the biggest LED billboard in Australia. Another Ci project, Emporium held the title for quite some time. This time around however there are two of them, each providing a commanding view to the 45,000 motorists that travel on Melbourne's airport freeway each day.

Having two such screens in close proximity gives advertisers the unique opportunity to create playful content where the two screens can interact. We can't wait to see what Australia's best creatives come up with, from conducting conversations between screens to passing objects back and forth. These screens allow full synchronisation between them, full motion content and eyecatching HD display capability with over 1.52 million individual LEDs per screen.

“Installing such grand-scale digital screens is not only ground-breaking for an Australian airport but also the country, taking our ability to raise brand awareness to new heights for marketers,” Melbourne Airport Chief of Retail Andrew Gardiner told The Moodie Davitt Report. “Melbourne Airport is Australia’s busiest 24/7 airport, servicing almost 37 million people annually, so we are guaranteed to capture the attention of millions of travellers each year.

These screens will also play a key role in the airport’s ability to communicate with passengers. “During important dates such as Christmas and New Year’s Eve, the screens will come to life with bespoke graphics. We can also promote Victoria’s key events and attractions such as the AFL Grand Final, The Australian Open and The Australian Grand Prix, which is really exciting.”

Part advertising screen, part airport community screen and part showcase for the state of Victoria, we think these screens have a bright future. Ci's manufacturer partner in this instance was Unilumin.

Join up to Ci

No one wants to remember another password, so we don't have any on Ci. Just sign up with email and we'll send a magic link to your inbox.

Ooops, it appears we already have that email address in our records. Not to worry! Just hit continue and we'll send a link to .

Tell us the address associated with your account, and we'll send a link to your inbox. Open the link in that email, and you're all set.

Are you new to Ci?

We've emailed a magic link to your address. Open it and you'll be signed in.